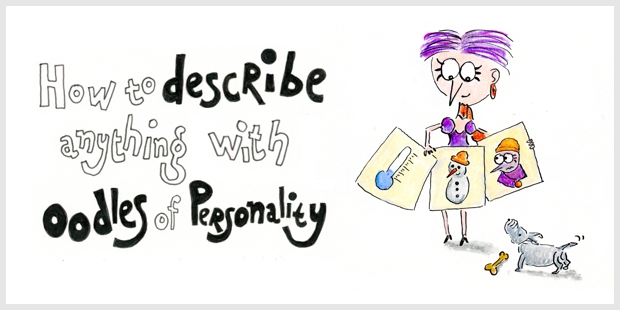 Follow the three steps below to describe anything with oodles of personality …
To write descriptions that ooze personality, go beyond the obvious. Think a little harder to find strong imagery to fully engage your reader. This works for anything, whether it’s the scenery in a fiction book, a product description on an ecommerce site, or the service page on your website.

In her hit song “Blank Space,” Taylor Swift uses concrete, evocative descriptions to evoke two very different impressions.
To be plausible, the descriptive writer has to constrain the concrete, evocative image to suit the reader’s knowledge and attention span. “Her eyes were brighter than the sapphires in the armrests of the Tipu Sultan’s golden throne, yet sharper than the tulwars of his cruelest executioners” will have the reader checking their phone halfway through. “Her eyes were sapphires, bright and hard” creates the same effect in a fraction of the reading time. As always in the craft of writing: when in doubt, write less.

“On one corner of my dresser sits a smiling toy clown on a tiny unicycle―a gift I received last Christmas from a close friend. The clown’s short yellow hair, made of yarn, covers its ears but is parted above the eyes. The blue eyes are outlined in black with thin, dark lashes flowing from the brows. It has cherry-red cheeks, nose, and lips, and its broad grin disappears into the wide, white ruffle around its neck. The clown wears a fluffy, two-tone nylon costume. The left side of the outfit is light blue, and the right side is red. The two colors merge in a dark line that runs down the center of the small outfit. Surrounding its ankles and disguising its long black shoes are big pink bows. The white spokes on the wheels of the unicycle gather in the center and expand to the black tire so that the wheel somewhat resembles the inner half of a grapefruit. The clown and unicycle together stand about a foot high. As a cherished gift from my good friend Tran, this colorful figure greets me with a smile every time I enter my room.”

“My most valuable possession is an old, slightly warped blond guitar―the first instrument I taught myself how to play. It’s nothing fancy, just a Madeira folk guitar, all scuffed and scratched and fingerprinted. At the top is a bramble of copper-wound strings, each one hooked through the eye of a silver tuning key. The strings are stretched down a long, slim neck, its frets tarnished, the wood worn by years of fingers pressing chords and picking notes. The body of the Madeira is shaped like an enormous yellow pear, one that was slightly damaged in shipping. The blond wood has been chipped and gouged to gray, particularly where the pick guard fell off years ago. No, it’s not a beautiful instrument, but it still lets me make music, and for that I will always treasure it.”

Generally speaking, a simile is weaker than a metaphor. “Her hair felt like silk” just isn’t as powerful as “Her hair was silk”. But both figures of speech have their place in good descriptive writing.

When Mary pulled open the door, she had to screw up her eyes against the glare. The sun dazzled off the snowy roof tops like they were mirrors, and it was thirty seconds before she could see clearly. The snow on the driveway was untouched by human footsteps, and Mary felt like a pioneer as she trudged towards the front gate. Overnight, while she had slept, the world had turned into a fairy tale.

1. A sol-fa of song erupts as the stars fade away, the ancient alchemy of the dawn chorus.
3. A galaxy of dragonflies fizzed through the beams of light, wings a-glirr in the magical space between river and air.